I was thinking about the reasons people like to listen to vinyl music when we have digital. Digital is so much clearer, so much more full. It’s, technically speaking, just better quality music. But people still want to listen to vinyl albums and records. Companies are making new albums on vinyl because of the demand. Record stores are opening up again (not like the old days – now that we can buy so easily online).

Then it dawned on me, maybe people don’t always care about the highest sound quality, some people (maybe lots of people) are interested in hearing the music the way their parents and grandparents heard it. Some people like the imperfect sound that comes from vinyl.

This is exactly the way some of us feel about film cameras, and the photos they make. Even though I grew up with analog, and couldn’t wait to go digital, I love collecting and using film cameras and doing things the way I did them 40 years ago. Analog just has a special look and sound that digital doesn’t have. There are even Lightroom effects that simulate old photos – analog photos.

One of the big differences between analog and digital is in the colors. Look at the image below (photo taken from Pittsburgh’s Mellon Square circa 1977), and notice how colors rendered a little off – and over time (at least on paper) colors can change. Depending upon the film being used, colors will render warmer or colder, or just more or less accurate. I remember using selenium toner on my black & white images to preserve them – so they wouldn’t change over time. We can change coloration in digital images, and control how colors are captured using settings like white balance, but it’s not the same as it was with film. With film, we sometimes didn’t have much control – if our film had sat around, especially in warmer temps, the colors would come out differently than if the film was fresh, or if we kept it refrigerated. Maybe that’s it – with film, we didn’t have all that much control, and the control we had was a bit fuzzier. With digital we have a greater degree of control than we had before, and much easier ways to control our images/music/whatever. 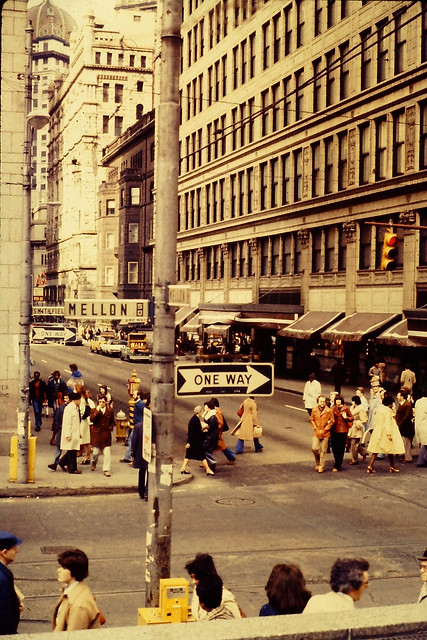 Maybe, just maybe, some people enjoy going back to a time when things were what they were, and we didn’t have all that much control.

Just my 2 cents worth on this Easter Sunday. Happy Easter everyone!