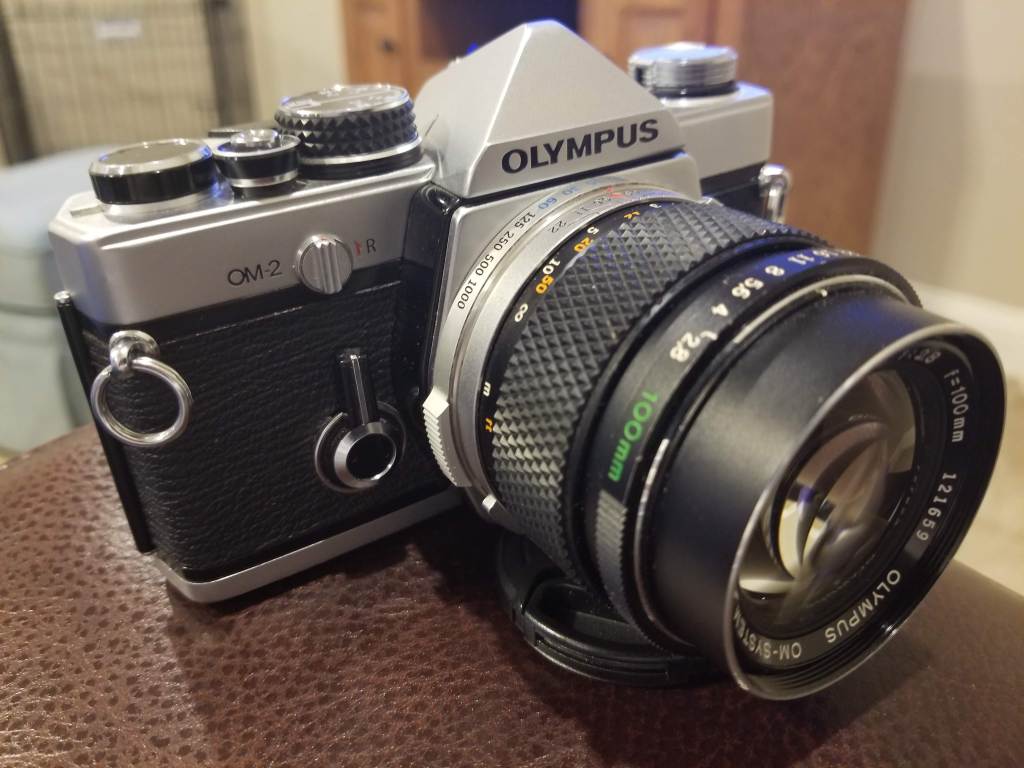 I’ve been using several different cameras lately. The Nikons (F, F2, FM, FE, etc.) are all really nice, or everybody says they are. Canons from the 70’s and 80’s are a bit too, well, complicated. They just have too many controls, and cameras like the A-1 are just not designed well. I think Canon was technically advanced, but the technology wasn’t quite far enough yet. They were still very mechanical, but were trying to cram in all the functionality they could, into a body that just wasn’t ready. Now, this brings me to Olympus OM-1/OM-2, of which the OM-2 is my favorite.

I’m struggling to figure out why I like the Olympus OM-2 so much. All the OM cameras after the OM-2, added features that weren’t really necessary, in my opinion. The multi-spot metering, or spot metering at all, are nice, but really not necessary. The OM-3 and OM-4 memory features, are helpful, but not necessary. Those features just, arguably, overcomplicate the artistic part of photography. And, the OM-2 isn’t perfect – I absolutely hate the idea of having an on/off switch. Nikon made it better in the FE and FM where the film advance lever is the on/off switch. In my opinion that’s the easiest way. The OM-4 was better by adopting the timed auto off feature (like the Nikon FM2 and FE2).

That all being said, the OM-2 feels just about perfect. It feels good in your hands. It has a manual mode that mimics the OM-1 pretty much – and an auto mode that works really nicely (the shutter speed indicator in the viewfinder is simple, yet elegant).

Now, this is fine for me, but some photographers in the 70’s would have gone with the Nikon to get the high end features that Olympus couldn’t provide. I get that – but even back then I didn’t need more than the OM-2. So, as I compare, and think about the features I need, the OM-2 just fits my needs almost perfectly.

Looking at the cameras now, almost 45 years later, I see that Olympus offers some very good quality used cameras, as well as top notch optics, for quite a bit less than Nikon equipment costs on eBay. Even though I have a few Canon bodies from the 70’s and 80’s, and I shoot Canon digital today, I don’t really like Canon cameras from that era. I know Canon made a huge impact with the AE-1 and A-1, and things in the whole industry changed because of Canon. That’s fine, but aside from the F-1, I really don’t care for their cameras. They were not intuitive, and they just didn’t feel good in my hands.

I think part of the reason I like collecting cameras has been to really find the things I like and don’t like. To technically evaluate, test and try multiple cameras. I keep coming back to my Olympus bodies as my favorites – especially the OM-2. I still shoot with my OM-4 from time to time, and I like shooting with my Nikon FM2 and FE2, but the Olympus just feels and works better for me.

I’d like to hear from you. If you have a favorite old camera body and why. I think it’s fun to try different cameras. I could never have done this as a student and young photographer – I just couldn’t afford to buy multiple cameras. I think the best job I can imagine would be a tester and reviewer for photo equipment. I just love trying and evaluating how cameras work. Sometimes it’s hard to know which camera you’re going to like best until you use it for a while.

I’m going to be spending a couple days in New Orleans, and the hardest decision for me is what camera body to bring… it will probably be my OM-2, but we’ll see.