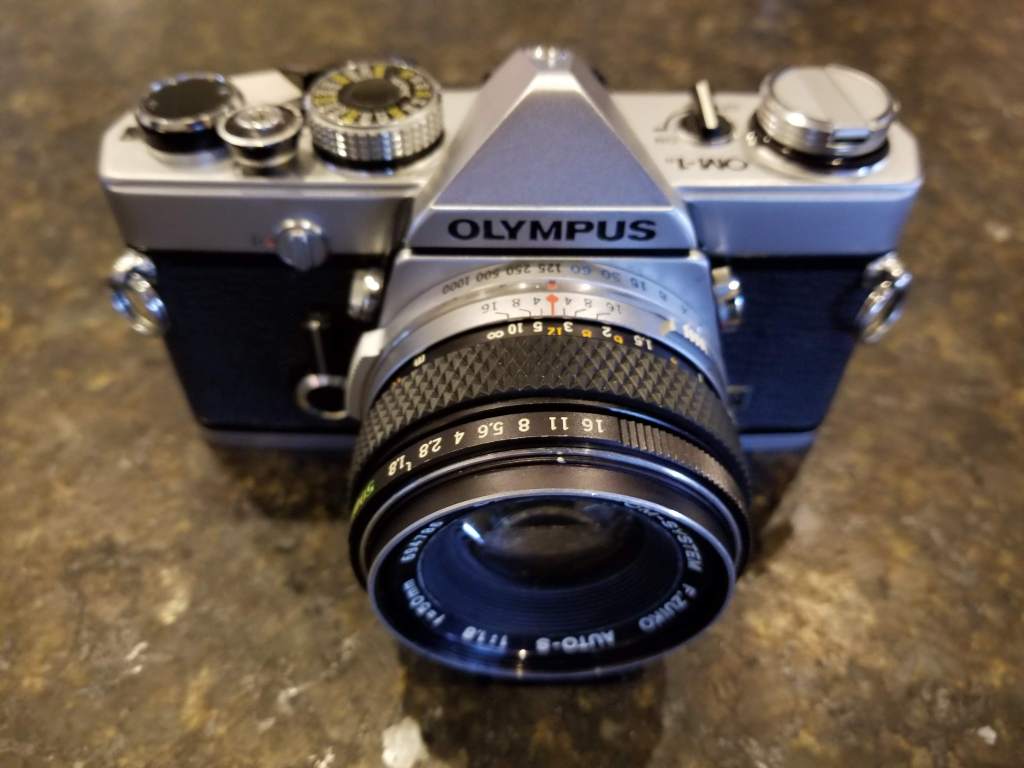 Periodically, I pull out an old camera and shoot a couple rolls of film with it – just for fun. Today, I pulled out an OM-1 body with 50mm f1.8 lens, which is the same camera and lens I shot with in college. It brings back fond memories. Memories not only of college, but of why I liked this camera when I first picked one up. It’s a solid little camera. It’s not just heavy, but it feels solid in your hands. Maybe it’s just me, but it’s different than any other SLR I’ve held. My Nikons (from the Nikon F through my latest Nikon, the FM3a) don’t quite feel the same. I don’t even understand it.

When I was in college, I would have naturally liked to own a Nikon. Around 1977, almost all professionals (at least the ones I saw) used Nikons. I don’t think anyone else even came close to capturing the pro market like Nikon did in those days. I just couldn’t afford a Nikon, so I looked at other options. I never was one for planning ahead, or I could have saved for a camera. I saw an advertisement (probably in Popular Photography, or Photographic magazine) for the Olympus OM System, and decided to check it out.

Compared to lenses today, and even lenses back in the 70’s, these were small and light. My Nikon 28mm f3.5 (from around the same time) is almost twice as tall as my Zuiko 24mm f2.8, and the Nikon is slightly larger in diameter.

The other thing I like about the Olympus OM bodies, is that they are very quiet. This is party due to some enhanced sound dampening, but mostly due (in my opinion) to their cloth focal plane shutters. Nikon’s metal shutters are just louder. Now, Nikon was able to achieve some incredible specs with their metal shutters, like 1/2000th of a second, and later 1/4000th of a second shutter speeds and 1/250th of a second flash synch (also due to the shutter running vertically instead of horizontally like the Olympus shutters). And these technical specs set Nikon on a plane of their own, I know. But, the OM-1 was, and still is in my book, a special camera.

So, what happened to the OM System? Well, Olympus eventually caught on and started producing auto focus cameras, and some of their newer models are very nice. But Olympus dropped out of this market in the 90’s after Canon and Nikon both built great auto focus systems – based on newer lenses and newer bodies that were way ahead of anything Olympus had at the time, IMO. So, at one time, from 1975 through the early 1980’s, Olympus was regarded to be one of top 3 or 4 SLR manufacturers – Nikon, Canon and Olympus were probably the top 3 for a time – as far as popularity. Even though I shoot with Canon cameras for my digital work now, I didn’t really like Canon’s cameras back then. Things have changed quite a bit though. Sony has gobbled up Minolta and Konica (remember them) and become one of the top cameras today – although (as I’ve said before) I think Nikon and Canon will eventually beat out Sony for the professional mirrorless market.

So that’s what I was thinking about today. I’ve turned to my cameras to occupy some time since a good friend of mine passed away this weekend. I believe he’s in a better place now, but I guess this is how I express my grief – by talking about cameras.

Anyway, if you ever get a chance to get your hands on an OM-1, I’d love to hear your thoughts. They’re quite old by now, so it’s not uncommon to find one with a broken meter – but the mechanics are very good, and I’m amazed at how long they keep working. They work just fine without a battery if you use a handheld meter (like my favorite, the Sekonic Studio Deluxe). I’d love to hear your feelings – and if you’re old like me, you don’t need the camera’s meter to make good photographs!