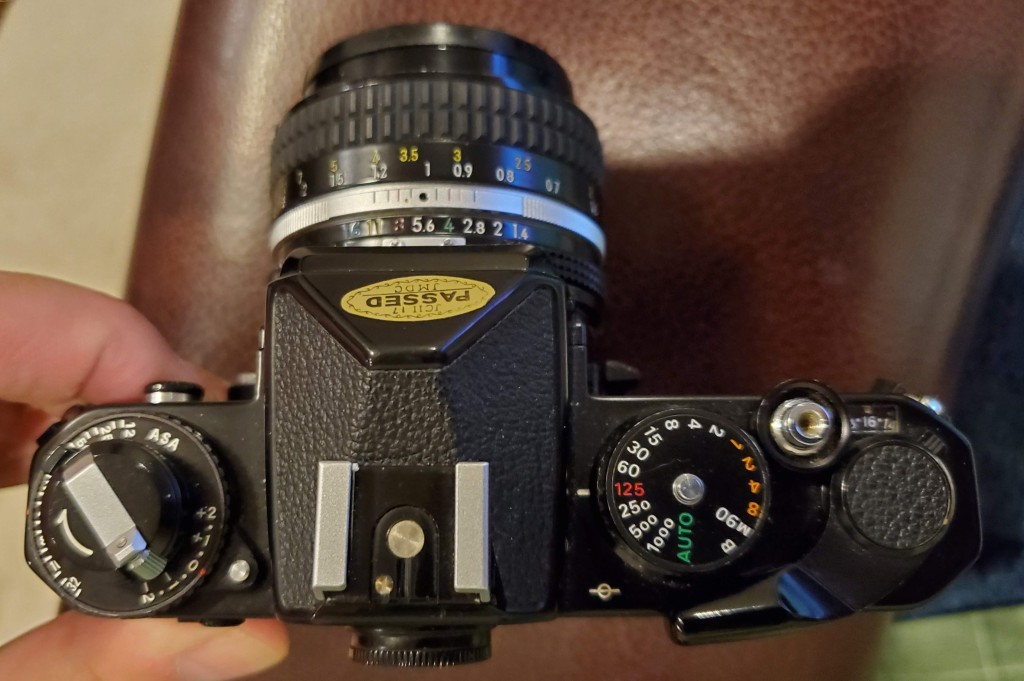 I have lots of reviews and sample photos for all kinds of cameras on my blog. I suppose if you ask 10 different people what their favorite is, you may get 10 different answers. My favorites are my Olympus film cameras (because that’s what I’ve used most), but I like lots of different cameras for many different reasons. I see stats on my blog, however, about what people are searching for when they find my pages. It’s interesting to me that the Nikon FE/FM & FE2/FM2 reviews are by far the most popular. Barely a day goes by when I don’t see several hits on those pages (and my blog isn’t that popular).

So I thought it would be good to pick one of these very popular cameras and talk about it a little. I think they are all very good, reliable, cameras, but I really like the original Nikon FE. It’s a simple, inexpensive, film camera. It has aperture priority auto exposure, and a very nice match needle manual exposure mode. It’s light and compact – and there are a lot of them out there, so finding one online, or at an estate sale, or thrift shop should be fairly easy. I always like Ken Rockwell’s reviews, and he has a good one about the Nikon FE here.

Since this camera was first available in 1978, they’re quite old now, but the ones I’ve seen are, mechanically, in good shape. I think most pros picked up FM or FM2 bodies for spares, since these were fully mechanical. The FE required batteries to operate, which most pros of the time didn’t like. If you have a spare body, you don’t want to have to worry about batteries – or at least back then that was the thought. As far as today, since it uses standard LR-44 batteries, that shouldn’t be an issue. These are readily available, and should last the better part of a year in the camera.

The camera’s electronics and meter are activated by simply moving the film advance lever out until it clicks, and pushing it back turns them off. Very simple. Turning the meter off also locks the shutter release button (see images below).

Below is a picture of the viewfinder. Notice the match needles on the left, and the f-stop is visible on top of the screen (not as clear as we’re used to in the digital world, but it’s just a reflection of the numbers on the lens). To make this work, there’s a small window on the front of the prism, that allows viewing of the f-stop via a second, rear set of f-stop numbers on the lens (see image below). Non AI lenses didn’t have this, so when using an older lens that hasn’t been converted, you won’t see the f-stop numbers at all.

It was very creative that Nikon added this ability without really changing much. Older lenses (non-AI) could be modified to have this new, back ring with f-stop numbers. It also connected with a slide on the camera to provide the AI function without the old “rabbit ears” method. This allowed the camera body to know what f-stop was selected and give correct meter readings without the lens actually stopping down to the selected f-stop. Non-AI lenses before this used a pin that slid into the silver tab sticking up on top of the lens (so this lens was backward compatible with older bodies). The old connection method could be a little problematic as you had to be sure the pin was engaged properly when mounting a lens – which was accomplished by twisting the f-stop ring back and forth a couple times to connect the pin. The new method didn’t require anything special when mounting a new lens, it just always connected properly.

With the advent of these new lenses, and the bodies to accept them, the old lenses would not fit on new bodies without modification. However, the FE provided a way to still use the old lenses. In the image below, the blue arrow is pointing to the small metal post on the camera body, that engages with the ring on the lens. If you use an older lens with the FE, you can flip this small post out of the way so the old lens will function without rubbing/pressing against the metal post. The old lenses were made to fit bodies without this post. To flip this post up and out of the way, you simply press the small silver button (near the bottom of the arrow) to release the post. So, it’s a little complex, but it allowed the use of the older style lenses, although you would have to set the exposure in stop down mode (which means the viewfinder would get darker as you stop down your lens to get the correct meter reading).

So, the Nikon FE is an interesting camera. In history it was built to transition to a new type of Nikkor lens. Through a few modifications of their lenses, Nikon did their very best to make these transitions easy, without obsoleting their older lenses. I think they did a fairly good job.

As far as using the FE, I think it works great. It’s simple, accurate and fun to shoot with. You can find them online fairly easily for at or under $100. A Nikon 50mm f/1.4 lens may cost another $100. Or, you might run across one at a garage sale for way less! If you find one, I think it’s a great camera to learn film photography on. Let me know what you think. I’ll try to show some images from my FE in a future post – if I can come up with something interesting to photograph…