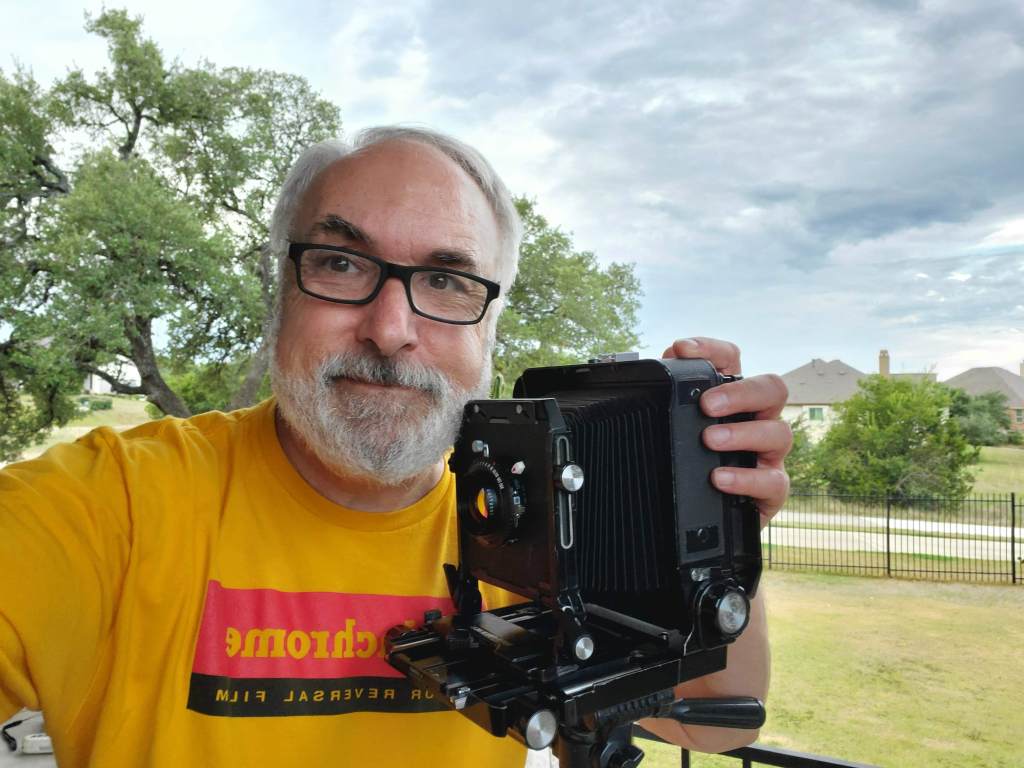 This is my first experience with large format photography since college – over 40 years ago. I have just obtained a 4×5 view camera. It’s a Toyo 45A Field Camera. I will shoot (at least initially) 4×5 black and white (Ilford FP4 & HP5) negatives, and I’ll develop them at home (more on that later).

I’ve written about film photography and how it helps you slow down – but then I remembered when I shot only film, that 35mm was pretty easy to go crazy with. I could easily shoot more than I should have. It didn’t force me to slow down – it merely provided the opportunity to slow down (you had to stop and change film every so often), really only slightly more than digital photography does. Well, large format forces you to slow down. You shoot one image at a time, and your film holders contain only 2 exposures each. The process is necessarily very slow. But, I think that’s good. It will give me time to think – and I will only be able to carry 20 (max) sheets of film since I only have 10 film holders.

I’m also anxious to compare the large format grain (or lack of it) compared to 35mm, or even 120. I’m going to take the same image with all 3 formats, on film, and compare them.

And, lastly, I’d love to play with the various tilt-shift functions of the Toyo. A couple things that interest me, where this might come into play, are architectural and landscape photographs. I have known how tilt-shift functions can help with perspective in architectural work. I hadn’t thought about landscape though – and, specifically, how you can tilt your focal plane to, for example, cause your foreground to be sharper than it could be with a conventional (non tilt-shift) lens. Let’s see what I can do with this.

I’ll test the grain and the tilt/shift functionality in a future post, since I’m anxious to publish this post – and large format photography is, well, slow – so waiting until I get these other 2 aspects tested may take me a while.

Now, regarding the film. I haven’t loaded 4×5 film holders for over 40 years – but, after playing around a little, it started to come back. I forgot the bottom of the film holder folds down to allow sliding film in and out. Once I found (remembered) that, it made things a lot easier. Also, I’ve become aware of something when I load my roll film in my dark closet. If you have an Apple or Samsung watch, please take it off before turning the lights out and loading your film holders. I guess I was so excited to load some 4×5 film the first couple times, I went to it with such enthusiasm, that I forgot to remove my watch. Well after I had carefully removed a couple sheets from the box, and was preparing to slide my first sheet into the holder, suddenly, and to my surprise, I could see. After I realized what was happening, I removed my watch and dropped it to the floor. It’s funny, I know how to light up my watch by movement or pressing a button, but turning it off isn’t something we typically want to do. Oh, well. My first couple images may be fogged, but I learned a good lesson, I suppose. Developing them and seeing the damage will help me remember next time – and these first few images are just practice anyway.

As far as my developing. I’m using an SP-445 tank which holds 4, 4×5 sheets. And only uses 450ml of developer. So that’s just about the same as my 35mm or 120 rolls would use – so I think that will work for now. I may revert to a Patterson tank (which will require 1 liter of liquid) and 4×5 film reel in the future – but I’d like to stick with this for the time being.

There are a few other solutions for processing 4×5 film out there, but not many at this point. I found this on eBay – they are quite expensive (I think around $90 USD) but most of the options are a bit pricey since they are a bit scarce these days – supply and demand, and all that. So, if you choose to go down this road, be warned, finding things like processing tanks for 4×5 is not the same as it is for 35mm or 120 film.

Now that I’m writing all this down, I’m wondering if it’s really worth it all. Large format is definitely a larger investment than 35mm or 120. At this point I can’t make a judgement on whether it’s worth it or not. The images I’ll be able to capture and create on 4×5 film will tell me, and the amount of enjoyment and relaxation it brings. I have a feeling it will be, since I thrive on this kind of thing.

After processing several sheets (12 so far), it’s nice to know that I can still do this. Except for the “watch in the darkroom” incident (which has happened now twice) everything has gone as expected. The film developing portion has gone well.

Have you shot with large format cameras? If you have, was it worth the effort? I’d love to hear your stories.