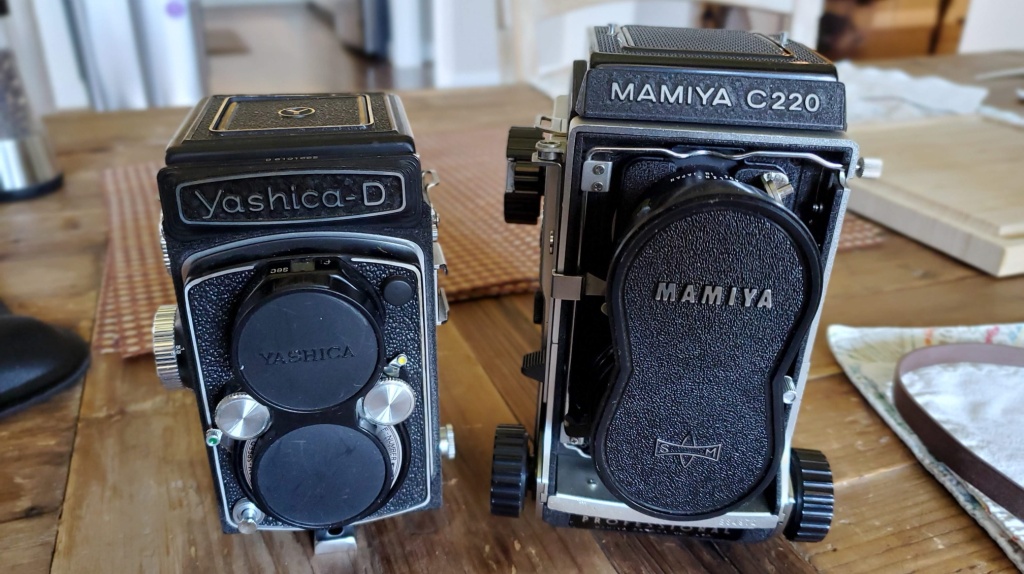 I look for old cameras from time to time, and I recently found a Mamiya C220 and C33. Both examples of Mamiya’s twin lens reflex cameras, and both in great shape. Mamiya was one of only a few camera makers that produced twin lens reflex cameras that allowed for interchangeable lenses. I have a 105mm lens and a 55mm lens. The 105 is on the high end of normal lenses for 6×6, and it provides a normal angle view, almost identical to a 50mm lens on a 35mm body. The 55mm lens would provide a 70 degree angle of view, close to a 24mm lens on a 35mm body.

You will also notice that the Mamiya C220 is taller than a Yashica D. In cameras like the Yashica, to decrease the height, the film starts under the camera, and bends around to travel up the back. Mamiya’s extra height allows the spools to sit directly above and below the film plane, so there are no sharp bends in the film as it travels. It stays flatter in the Mamiya design, but the camera is necessarily larger than some other contemporary cameras.

Here’s a list of Mamiya TLR cameras, and the dates they were made. I got this data from a review of the C220 body by Ian Bartlett on Emulsive.


Another unique feature of the Mamiya TLR bodies is the ability to focus very close without any special lens or other adaptors. They use a bellows for focusing, so this allows the lens to move farther away from the focal plane than normal. This is an interesting feature that I’m anxious to test. Extending the bellows for close focusing will impact the exposure, as well as the alignment of the subject due to parallax. These issues would be corrected, or minimized, by the use of the SLR with TTL metering.

I know these cameras were used by professional photographers back in the 70’s, mainly for weddings and portraits. They were popular with anyone who was serious about increasing the quality of their photographs. Compared to some of the smaller cameras, smaller film formats, photos with a medium format camera can look almost grain free.

I have trouble focusing because of my poor vision, but the first image is noticeably less sharp and more grainy than the second. This becomes more apparent when enlarging. The first, taken with my Canon New F-1 and the second taken with my Mamiya C220 – both on Kodak Tri-X at ISO 400.

The main issue with interchangeable lenses on a TLR was that you needed 2 lenses – obviously more expensive than a single lens to make. SLR cameras solved this issue (along with other issues like parallax focusing at close distances). There was a time when a photographer that wanted extremely fine grain, and hi-resolution images would choose a medium or large format camera. Naturally, the larger the format, the better the image quality, and the larger the camera. So these cameras were favorites of portrait photographers because they provided the image qualities of larger formats, but were easier to work with than large format view cameras.

I’ve done some shooting with my Zenza Bronica ETR-Si, which produces a 6×4.5 size negative, and shooting 6×6 has a little different feel to it. I’ve heard that some photographers, like Ansel Adams, preferred the 6×6 format (Ansel Adams used his Hasselblad quite a bit, but they’re generally too expensive for me). I’m not sure if I will like 6×6 since I’m so used to shooting 35mm. It takes some practice to feel comfortable with the square format. It just seems so plain to me – but it is crop-able, I suppose.

Here’s a photo of my C220, and C33 next to my Yashica D. The Yashica may be the oldest of the group, but all were in general use in the 60’s and 70’s, and even later. Some D’s were produced as far back as 1957 or 58. Feel free to check out my review/report on my use of the Yashica D by clicking here. The Yashica was not really a professional level camera, and it’s one that I’ve had for several years. Both Mamiya bodies are new to me.

I wanted to test the C220 and C33, so here are some photos taken with them. These cameras would have been used for studio work 50 years ago or so. In a studio environment, lighting would be constant, so an external meter works well. Around the time this camera was used, 35mm cameras like the Nikon F and F2 were starting to be used in the field by journalists, and other photographers needing more portable equipment. I’m expecting fairly shallow depth of field, and low grain/high resolution results, so let’s see how my expectations panned out.

Then some FP-4 to test for sharpness and lower grain. I’m actually very pleased with my FP-4 shots. And I like FP-4 in general – shooting, and developing.

After testing both Tri-X and FP-4, I really like the results of the FP-4 more. I love the smoothness of the grain. Now if I can just master the focus. Speaking of focus, the ground glass focusing screens on these cameras are pretty nice. I’m recalling using a large format view camera, and how nice the image looks on a big piece of ground glass!

I like the Mamiya C series cameras a lot. They are heavy (the C220 is lighter than the C33 or C330) but the results can be very rewarding. I think I need to practice a little more.